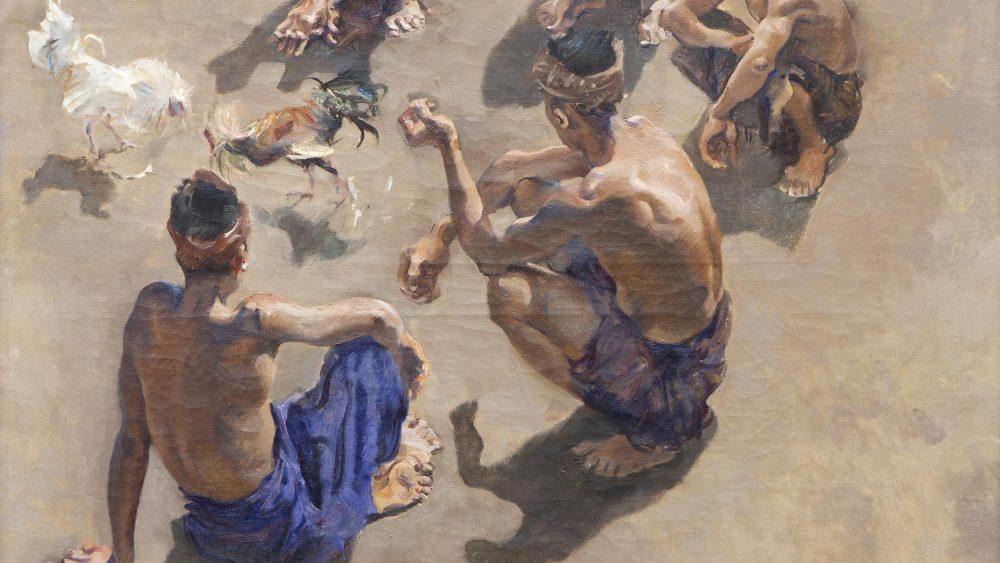 Spanish by descent, son of a French mother, educated in Vienna, where his father was naturalized, Roland Strasser inherits in rich measure the European tradition of design, draughtmanship, and decoration. He was born in Vienna in April 1886. His father, Arthur Strasser, a Spaniard eminent as a sculptor, and as Professor at the Academy of Fine Arts in the Austrian capital, bred him to art, and trained him in his school. More detailed about the family: the Basque name of the Strasser’s family is Quirquez. Father Arthur Strasser was Chevalier of the French Legion of Honour and held high Austrian decorations. He won the Grand Prix at Paris in 1900.

Roland’s gifts were thus fostered by example, by encouragement, and by the stringent discipline of education. He studied at the Academies of Arts in Vienna and Munich. During WWI he was the official war-painter of the Austrian Army. Roland Strasser has travelled widely. He came to Indonesia in 1920, lived and worked in Java, Sumatra, Irian Jaya and Bali. He exhibited frequently in Indonesia. He travelled with the Dutch artist Willem Dooyewaard – whom he met in 1921 – in China, Tibet and Mongolia. Lived in Kintamani, Bali, with his wife from 1935 until 1945, after which he finally settled in in Santa Monica, USA, where he died in 1974.

Roland Strasser was inspired by the romantic island of Bali, where Hindu art and tradition are intermingled with what is indigenous. The colours of Bali glow on his canvasses. What he has seen, he has seen with no false or indolent eye. A sculptor’s training gives weight and volume to his work. In his portraits ‘soul speaks to soul’. A gifted painter is also a psychologist. He does for us what no camera can do. He perceives and portrays personality. He is a scientific witness and also an interpreter. Strasser’s works leave on the memory an indelible impression of Bali grace, they humanize our knowledge of parts of the Far East. His Balinese works are rich in colour, unforgetable in design, full of temperament. The writer Michael E. Saddler refers to a theory by Mrs Laurence Binyon in her book “The mind of the artist“ (1909), and mentiones six points in regard to which a work of art should show fitness and skill: ‘It must have a rhythmic vitality, a significant form, conformity with nature, fitness of colouring, a beautiful composition, and a fine quality of workmanship‘.

When measured by this exacting canon, this artwork representing a Balinese cockfight, does not fall short.