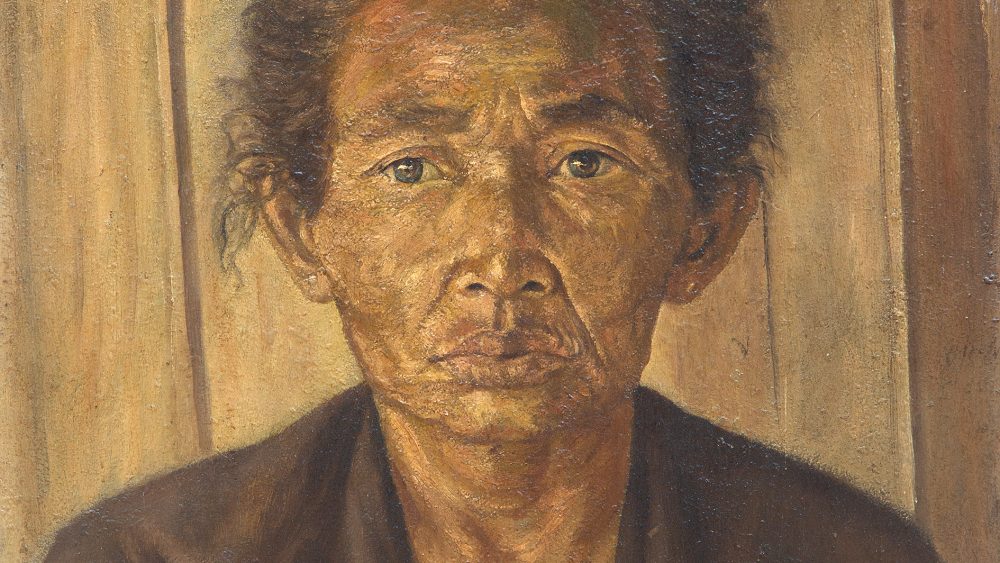 When the revolution broke out (1945-1949) to defend the proclamation of Indonesian independence (17 August 1945), artists were actively involved in creating works of art and fighting. Apart from that, artists also actively discuss the right and contextual forms and directions for Indonesian modern art. As children of a new nation and country that emerged after the Second World War, they intensively communicate with the outside world to inform them that Indonesia has progressive and advanced artists. The newly proclaimed nation and state were driven by cultured people, not extremists or bandits. The revolutionary situation creates human ideas in art. From here, artists see the reality around them. It looks like the people who were hit by poverty and various social difficulties resulting from the war. However, artists can also feel the spirit for independence in the people’s hearts, the confidence to live sovereignly and no longer be colonized by other nations. Such a flourishing spirit makes Indonesian artworks – especially paintings – unique. The pictures made by artists are generally realistic because they want the art to be easily understood. They want to tear down the elitism of art from the legacy of past feudalism. Folk painting artists; paint what they see and feel near them. The artist paints themself, children, wife, husband, mother, neighbors, soldiers, guerrillas, militia, etc. Indonesian modern art in this period strongly represented these themes. Trubus Sudarsono is a young painter who has studied painting with Sudjojono since the Japanese occupation (1942-1945). He painted his mother with a revolutionary spirit above. His mother’s old face is described as exuding strength and determination despite living a simple life. Her clothes and the wooden door in the background show the destitution. Trubus painted using realist techniques – a technique he was very good at, and later Sudjojono even praised Trubus’s works as “Indonesian realism “– an authenticity with specific characters. Interestingly, Iboekoe’s painting is the red-and-white pin on the right chest. With this metaphor, Trubus wants to say that the struggle to defend Indonesia’s independence is not only dominated by young people or the military. The spirit of revolution also applies to all circles, including the older generation.