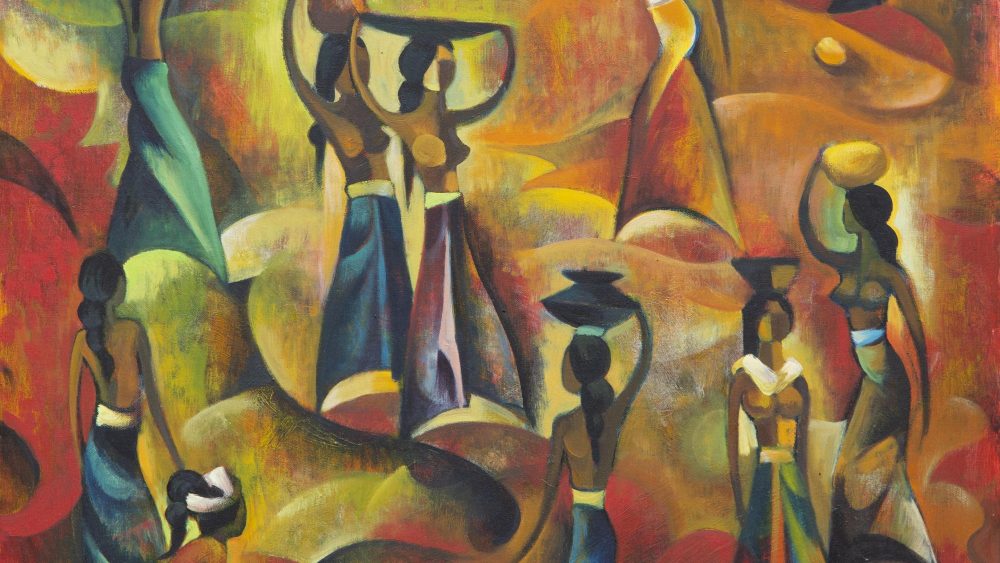 Han Snel was born on 16 July 1925 in Scheveningen, a beach town near the Hague, in the Netherlands. He was educated as a graphic artist but was drafted in 1946 and sent to Indonesia to recapture control of the newly independent Indonesia. The Dutch left Indonesia in 1949, but Han Snel fell in love with Bali and decided to stay. In 1950, he sought political asylum, became an Indonesian citizen and moved to Ubud, which was known as a vibrant center for the arts. He married a Balinese maiden, Made Siti, and embraced Hinduism. He immersed himself in the Balinese traditions that were full of daily and temple rituals. He built a traditional Balinese home and studio in an alley off the main road near the market square of Ubud. His studio can still be found there today.

His early Balinese works (1950 – 1960) portrayed his fascination with the beautiful and idyllic life in Bali. Balinese women and their daily family and ritual activities became his main source of inspiration. He produced numerous portraits of Balinese beauties and the depiction of their daily activities, which combined romanticism with the exuberant rawness and vivid colors of the early European Fauve artists. Influenced by his training as a graphic artist, the figurative compositions were rather flat and lacked depth, with a simplified background of the surroundings.

As life in Bali gradually changed, Han Snel was longing to break free from the tradition of figurative realism. By the 1960s, he started to explore expressionism and cubism, which reached a transitional peak in the early 1970s, as illustrated by this lot dated 1971. He was still enchanted by the market scenes which abounded near his home. In the1990s, his style moved completely inward, as if the outer stimulation no longer existed, and he produced predominantly abstract works with more somber colors, which were even dark at times. The figures disappeared and the exuberant and vivid colors of the tropics evaporated from his compositions.

The lingering theme of his works, starting in the late 1950s through the 1980s, was the depiction of activities of Balinese women at traditional markets. Balinese communities rely on a prescribed relationship between the temple, the royal palace and the market. Markets are the place where commoners, especially women, meet, and congregate every day. It is a place full of lively transactions and social interactions that produce a chaotic dynamic of movements, sounds and imagery. All of this must have had a profound impact on Han Snel.

He produced numerous compositions of Balinese women on their way to and from the market, carrying jugs, baskets, clay pots and the like on their heads. By the 1960s, the lush and busy Balinese market environment was no longer recognizable in his paintings. These were replaced by an abstraction of it. Initially, he depicted the market surroundings with patches of somber colors of blueish and greenish hues. Gradually the background became a composition of chaotic swirls of different colors. The simplified figures were placed in a more lyrical composition throughout and against this chaotic background.

The current lot, purchased in 1971, was produced at the peak of his exploration into the Balinese market composition, and at the transitional midpoint of his treatment of the background. The color composition retained the explosion of exuberant and vivid colors of the tropic, rather than the more monochromatic bluish and greenish hues of his later works from the mid to late 1970s. You can still see faint images of a tree, a coconut trunk and foliage at the top part of the painting. Seven Balinese maidens with elongated figures carry clay pots, baskets and water jugs and are placed strategically along a winding path from the top right to the bottom right while two women collect water at a stream along the path (at the bottom left corner). The canvas glows with the colors of the rainbow.

The provenance of this painting is exceptional. This painting was acquired directly from the artist in 1971 by Mr. J.R. Gunning, who was the managing director of Grafische Inrichting Johan Enschede & Zn; a printing company that also printed banknotes for Indonesia.

The current lot presents a rare opportunity to acquire a painting which exemplifies the pinnacle of a mature and exuberant period in the life of the artist.

Going to the market