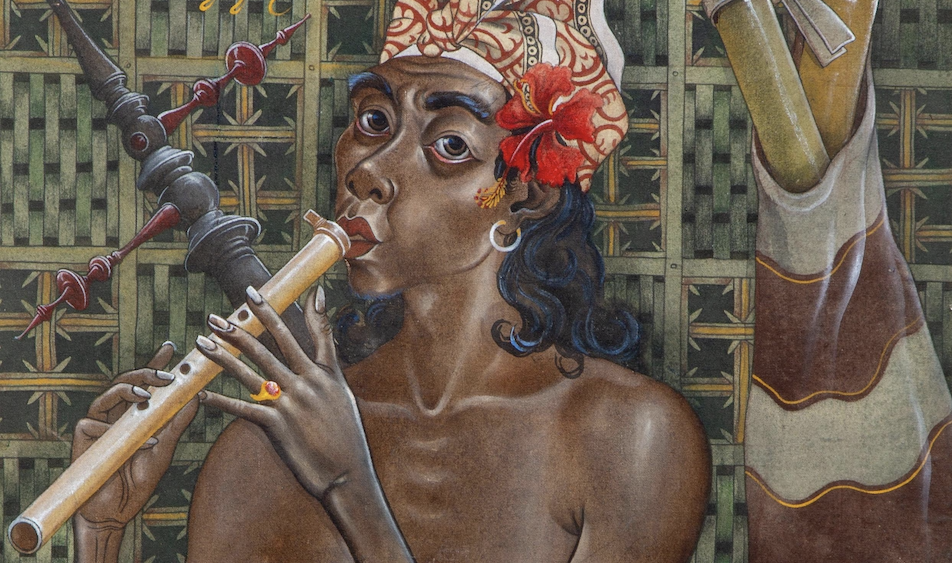 I Made Sukada of Pandang Tegal was one of most original young artists belonging to the second generation of artists from Pandang Tegal School of Ubud after the Second World War. His distinct and expressive style, usually featuring striking portraits, distinguished him from others in his peer group. His style was influenced by Dutch artist Rudolf Bonnet who co-founded the famed Pita Maha artists’ union. Painting with meticulous detail and care, Sukada’s output of work was limited. Sadly he would pass away at a young age leaving a small body of much prized work which continues to fetch very high prices.

This composition of a single flute player is an excellent example of his oeuvre at the peak of his powers. Seated straight up, the musician with an intense expression stares out with his cheeks puffed up as he blows with puckered lips upon his flute. Bare-breasted he wears an elaborate headcloth (udeng), a scarlet hibiscus flower behind his ear, over sarong (saput), earrings, keris, armband and batik scarf (selengdang) tied around his waist all painted with magnificent detail. A woven bamboo screen provides a checkered background. Other musical instruments also appear, a large gong in the left corner and a hanging bag full of other flutes right of his shoulder. The diagonal position of the flute and upper arms is balanced by a large image of the rebab, a stringed bow instrument behind him.

The painting is comparable to another painting of his, The Rebab Player, which sold in 2012 at Larasati Auction in Jakarta for more than €30.000 hammer price.

The painting was in the collection of John Thomas Chirgwin (1939-2019), who bought it directly from the artist in 1975 for more than forty years. Chirgwin was an avid collector of Asian and African art from Martha’s Vineyard, Massachusetts. He travelled through Asia extensively in the 1970s and 1980s and spent a great deal of time in Bali buying art from local artists. Among other things he was a close friend of Antonio Blanco.

I Made Sukada (1945-1982)
The Balinese flute player
Signed, dated and annotated ‘-75-/M.Sukada/Padang-Tegal-Ubud/Bali’ and again in Balinese script
Oil on canvas, mounted on board, 90×60 cm