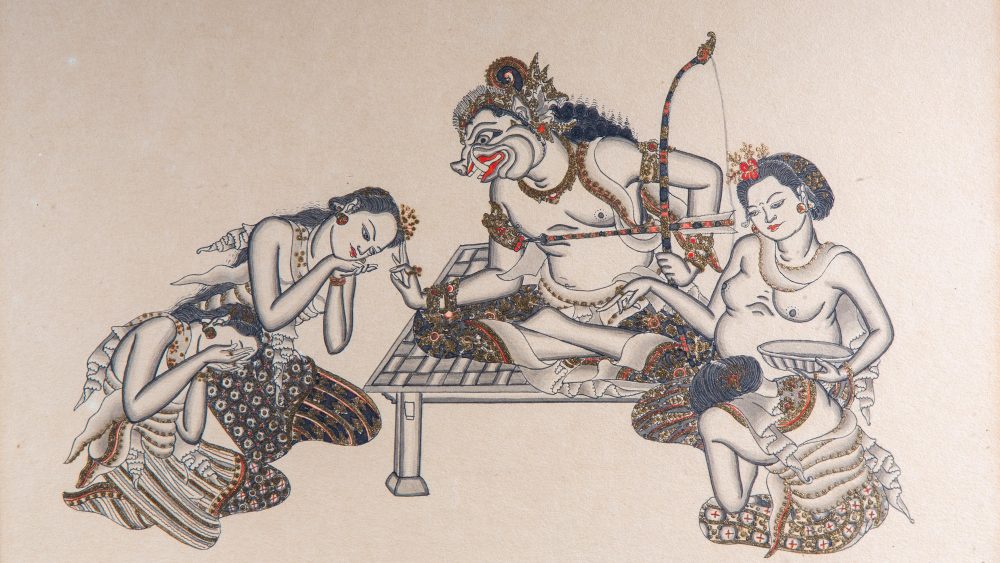 This rare composition by the most renowned of Balinese artists, I Goesti Njoman Lempad, tells the legend of King Bedahulu, who lived in the 14th Century. As the legend goes, the King lost his head during a meditation practice: his head disappearing to Heaven and his body being left behind. Witnessing this unexpected event, his prime minister, quickly slaughtered a pig and installed its head to replace the King’s head. When the King finished his meditation, he was furious, and from then on, he ordered no-one to look upwards at the King, lest they see his head.

This legend is popular among Balinese painters. The standard composition has an emissary attempting to verify that the King indeed has a pig’s head. During a banquet with the King, the envoy would take a water jug, and look upward to pour the water into his mouth, and so steal a glance at the King’s head. Another common depiction is for the envoy to look up, pretending to feed himself long beans.

In this masterpiece, Lempad chose to show the king in his chamber, accompanied by his royal female attendants. The king is sitting on his throne, holding a bow and an arrow, ready to kill anyone who would disobey his order to not look at him. The maids are on the floor bowing and looking down, their hands clasped together, paying homage to the king. Of particular note is that Lempad rarely made drawings with a triangular composition: only four such drawings are known to exist, and this is one of them.

Lempad is known for the fluidity of his line drawings, his master craftsmanship and his original compositions based on stories taken from the rich tradition of Balinese folklores and tales. This is an exemplary work from the 1930s. The drawing is adorned with gold and cinnabar. After 1945, it is known that his daughter, Ni Gusti Ayu Oka, helped Lempad to finish his drawings. This makes the prewar drawings by Lempad, such as this, which are entirely done by his hand: rare, sought after and thus very valuable.

Lempad’s masterpiece drawings are in the collections of major Museums and Libraries around the world: including the United States, the Netherlands, Austria, Sweden, Croatia, Indonesia and Singapore. The majority of his prewar drawings are in the Margaret Mead Archives at the Library of Congress, Washington DC, USA; in the Potjewijd Collection at the World Museum in Vienna, Austria; in the Rolf de Mare Collection at the Dance Museum in Stockholm, Sweden; and in the collection of the Neka Museum in Ubud, Bali.