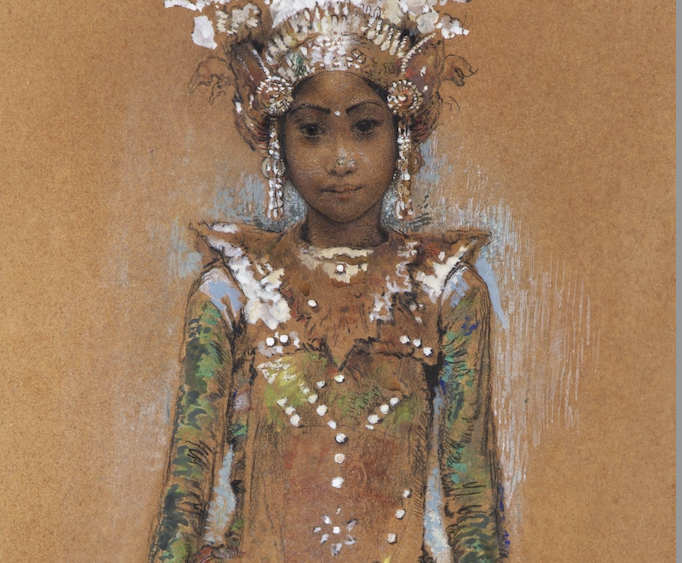 This wonderful portrait of Ni Sadri, who along with her adopted sister Ni Cawan, was one of the most famous Legong Kraton dancers on Bali in the 1930s. Posed standing at rest and wrapped in a splendiferous royal dance costume of green silk and gold, she holds a closed fan in her right hand.  Her elegant form and cherubic round face with enormous eyes are topped with a golden crown festooned with fragrant flowers – frangiapani, tjempaka and jasmine.

The star of an acclaimed dancing troupe from Klandis Kedaton, a village in East Denpasar on the road to Sanur, Sadri and Cawan regularly performed Legong Kraton beneath an enormous bunyan tree on Fridays for foreign guests staying at Hotel Bali, the island’s first luxury accommodation. Her beauty and grace did not go unnoticed by the host of expatriate artists, painters and photographers living or visiting the island and resulted in constant requests that she pose for them.

When Willem and Maria Hofker first landed on Bali in April,1938, they did not go to Hotel Bali, despite being commissioned by its owner-operator the KPM, the wealthy national packet boat line. Instead moved into a far more affordable and authentic accommodation within a Balinese compound in Klandis Kedaton that had been recommended by Dutch painter Charlie Sayers. Eager to work, Hofker, a gifted portraitist, immediately sought set to find models. He was happy to discover that in contrast to Java where it was difficult to find girls willing to pose, the women of Bali had no such restraint. Hofker was pleased that both Sadri and Cawan at the local dance and gamelan rehearsals had no such objections. From thenceforth he would work so diligently everyday executing iconic scenes and portraits varying from the angelic Sadri to the more earthy Ni Dablig.

The visual record proves that he was mesmerized with Ni Sadri, who was probably his most important subject, not only during the early period when he lived in Denpasar, but also in compositions, sketches, finished drawings and oil paintings, he would make until the end of his life. One of these is a very similar portrait of Ni Sadri, also standing at rest in full dance costume, now in the collection of the Print Cabinet of Amsterdam’s Rijksmuseum. It is inscribed “Ni Sadri, Legong Lebah Badung and dated September 1938” (Carpenter 1993, 38). An English inscription, “Ni Sadri, Legong Girl”, at the top of the drawing suggests it was sold to an English speaker. The speculation here is that Hofker, sad to see this masterpiece go, created a similar but slightly different version shortly later.

The brilliance of Hofker’s art, fully on display in this masterpiece was his ability to capture not only the outer likeness of his models, but also their emotional ‘aura’. He did this by putting them completely at ease in order to break the barrier between the painter and sitter. His success was also due to his uncanny ability to create idealized images that were nonetheless totally credible and real dispelling any sense of fantasy. He was also a thoroughly trained draftsman with a full understanding of human anatomy. This is especially seen in his accurate treatment of complex hand positions. Hofker also employed a style whereby certain critical areas, especially the face, were fully finished but others only partially so to create mystery and movement. As on most drawings, in this case he treated the paper with pigment to create an underlaying.

The artwork was published in The Art of Collecting: East Indies Paintings, an exhibition and book published by the West Fries Museum (Brommer 2019, 43 fig. 36 and back-cover). It is also featured on the exhibition poster. This exhibition and book were produced by the museum in honor of the pioneering work of collectors Rob Colauto and his partner Yvonne van Peperstraten, who first introduced the art of the Netherlands East Indies to the world through publications and exhibitions over thirty years ago.